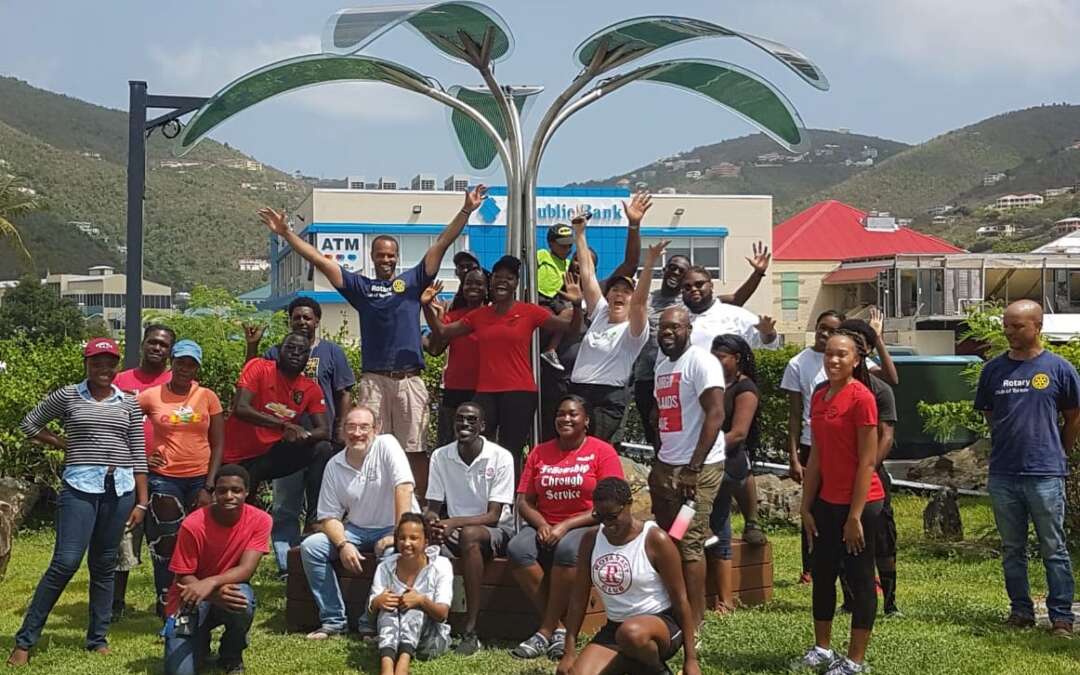 Visitors to Noel Lloyd Positive Action Movement Park in Road Town are able to sit down in the shade of a Solar Tree and charge their phones with power from the sun. In on-going efforts to demonstrate that “now” is the time for BVI alternative energy, local non-profits Green VI and the Rotaract Club of Tortola installed the eye-catching “OPTree” on Saturday, July 25.

Donated to Green VI by the Brazilian company, Sunew – a world leader in Organic Photovoltaics (OPV) and a “Best For The World” environmental honoree – the OPTree converts sunlight into electricity that can charge cell phones and power lights, media devices and more.  The tree “stands alone” – not requiring connection to any other power system. It generates clean energy through “leaves” made with OPV film.

The new solar tree works perfectly as a resting place, a meeting point and a way for people to experience technologies that reduce our Carbon Footprint.  Sunew’s OPV film is a solar energy technology that can also be applied to buildings, vehicles, furniture and more.

The OPTree installation and maintenance is another Green VI Partnership Project, with the Rotaract Club of Tortola, the Ministry of Transportation, Wickhams Cay Development Authority, the City Manager’s Office and the Ports Authority all lending their support. Additional sponsors include Rotary Club of Tortola, Creque’s Engineering Services, ATEC BVI, Abbi E. Christopher David Norris, Big Josh Towing and Trucking, EnS Heavy Equipment and Trucking and Sky is the Limit Trucking.

Along with outreach education, Green VI’s promotion of alternative energy over the years includes a 2012 petition to legalize renewables in the BVI, a demonstration of biofuel use at its Glass Studio, operation of electric cars on Tortola and Virgin Gorda, and the installation of 30 solar panels at the Youth Empowerment Programme (YEP). The YEP solar power plan calls for interconnection to BVI Electricity’s grid which, when complete, will be a huge step forward in providing the Territory’s energy needs through the abundant, natural forces of sun and wind.

Sunew: The company was created in 2015 with the mindset of revolutionizing the energy consumption and production paradigm, building a better world for next generations with the “greenest energy everywhere”. Sunew is the world leader in Organic Photovoltaics (OPV) technology, with the largest installations deployed worldwide. After years of research and development, Sunew built an innovative, continuous and highly scalable industrial production process. Pursuing positive impact in the environment and the community, Sunew was B Corp certified at its foundation. In 2019 Sunew was listed by the B Corporation as one of the best companies for the environment in the world, receiving the “Best For The World 2019 – Environment Honoree” seal.