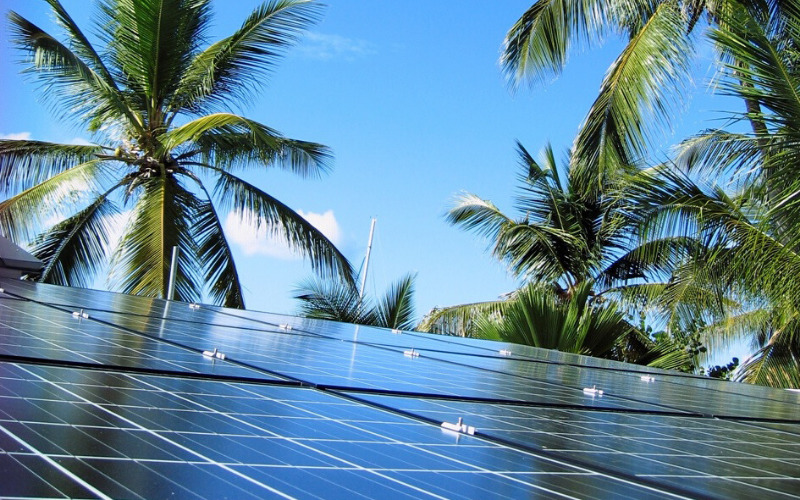 DISRUPTION from Disruption on Vimeo.

Climate change is a global issue but it’s impacts are most readily felt on islands. Although not a big contributor to CO2 emissions, the BVI can take action and use the wind and sun that we are blessed with to produce our own energy and reduce our dependence on imported fossil fuels.

Oil is expensive and has a large ecological impact throughout its lifecycle, from extraction to emission. In 2010 the BVI used over 11 million gallons of oil, which cost over $30 million. Green VI believes that this figure, and the pollution caused by the use of oil, can be dramatically reduced by the introduction of renewable sources of power in the territory.

Current legislation bans the primary use of renewables such as solar or wind power in areas covered by the BVI Electricity Corporation (BVIEC) grid. However, areas off the grid that have installed renewables show how successful they can be in the BVI. Peter Island generates 70% of its power from wind turbines and nearby Cooper Island generates 70% from their solar array. They are aiming for 95% of their energy to be renewable (solar and wind).

In March 2012, working for Green VI on a pro bono basis, local law firm Harneys drafted amendments to the existing legislation that would enable the swift introduction of renewables in the BVI. The draft law was presented to the government during a series of climate change workshops being conducted in the territory.

Green VI also set up a petition urging the government to amend the existing laws and speed up the process of implementing renewable energy in the BVI. To date the petition has garnered over 800 hard-copy singatures and more than 750 online signatures.

For its part the government has voiced support for initiatives that reduce our dependence on oil. These include comitments to increase use of renewables in a Climate Change Green Paper, the creation of aClimate Change Trust Fundthat, among other initiatives, uses tax incentives to encourage reduced use of fossil fuels, and proposals for several pilot schemes to test out the viability of grid-tied power generation, which enables unused renewable energy to be fed back into the grid.